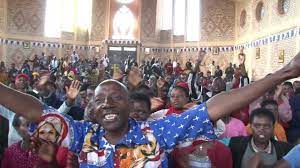 A chilling prophecy. God sent a messenger to warn Rwanda about an impending atrocity, but few heeded the warning. The genocide that ensued was one of the most horrific events of the last century.

Immaculee Ilibagiza knows the story all too well. Her entire family was killed during the genocide, and she survived by hiding in a bathroom with eight other women for three months. Her faith, inspired in part by the apparitions of Kibeho, was all that kept her alive.

Join Immaculee as she returns to Rwanda with filmmaker Sean Bloomfield, uncovering the secrets of Kibeho while reconciling with her painful past. Buried beneath the bones of a million victims, a story of hope and love emerges, and Immaculee discovers that the message of Kibeho is not just for Rwanda, but for the entire world.