Today the Church celebrates the memorial of St. Leo 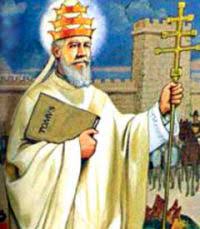 Today the Church celebrates the memorial of St. Leo the Great, pope and doctor, during whose pontificate the Council of Chalcedon (451) defined that Christ is one divine person with two natures, divine and human. It was a confirmation of his Epistola Dogmatica (Tomus) to the Patriarch Flavian of Constantinople. He vigorously defended the unity of the Church. He detained the onrush of the barbarians under Attila. His feastday in the previous (1962) calendar is April 11.

St. Andrew Avellino is honored today in the 1962 calendar. He was born in Sicily and died at Naples. As a cleric he went to Naples to study law, and was meanwhile raised to the priestly dignity. It is also the commemoration of Sts. Tryphon, Respicius and Nympha. Tryphon, a Phrygian, was martyred with his companion Respicius at Nicaea (c.250). Nympha was a virgin of Palermo, martyred in the fourth century.

Leo I, Pope and Doctor of the Church, ruled from 440 to 461. He is surnamed “the Great” and ranks among the most illustrious sovereigns that ever sat on the throne of St. Peter. Of his life, we know little; with him the man seems to disappear before the Pope. He saw most clearly that one of his greatest tasks was to vindicate the primacy of the Roman bishop, St. Peter’s successor, and to raise the prestige of the Holy See before the entire world. Hardly any Pope in history has occupied a like position in the ecclesiastical and political world.

As a writer, too, his name is famous. His sermons, which occur frequently in the Divine Office, belong to the finest and most profound in patristic literature. The Council of Chalcedon was held under his direction (451). The Breviary tells us: Leo I, an Etruscan, ruled the Church at the time when Attila, King of the Huns, who was called the Scourge of God, invaded Italy. After a siege of three years, he took, sacked and burned Aquileia, and then hurried on toward Rome. Inflamed with anger, his troops were already preparing to cross the Po, at the point where it is joined by the Mincio.

Here Attila was stopped by Leo (452). With God-given eloquence, the Pope persuaded him to turn back, and when the Hun was asked by his servants why, contrary to custom, he had so meekly yielded to the entreaties of a Roman bishop, he answered that he had been alarmed by a figure dressed like a priest that stood at Leo’s side; this individual was holding a drawn sword and acted as if he would kill him if he advanced farther. As a result Attila retreated to Pannonia.

Meanwhile, Leo returned to Rome, and was received with universal rejoicing. Some time later, the Vandal Genseric entered the city, and again Leo, by the power of his eloquence and the authority of his holy life, persuaded him to desist from atrocity and slaughter (455). Leo was also active in matters liturgical. The so-called Leonine sacramentary, a compendium of Missal prayers, contains many of his compositions; some liturgists give him credit for the beautiful offices of Advent.

Excerpted from The Church’s Year of Grace, Pius Parsch